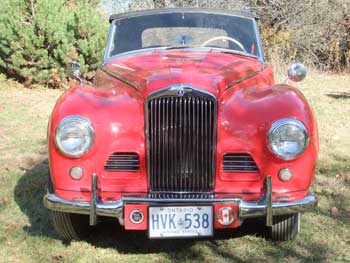 Here is a convertible from the grand era where cars were built for the Grand Tour to Monte Carlo from all of northern Europe. Here’s your chance to own a great piece of motoring history for a very reasonable price. This car has been in the same family since new (first the sister, then the brother, recently deceased).

The body has been restored over the years but has not been maintained in original condition. This car is one you can drive now and restore later, or you can jump right in and do it now. This car is vary rare because of its LHD configuration.

The Alpine Mark I and Mark III (no Mark II was made) were hand-built – as was the 90 drophead coupé – at Thrupp & Maberly coachbuilders from 1953 to 1955, and remained in production for only two years. Of the 1582 automobiles produced, 961 were exported to the USA and Canada, 445 stayed in the UK, and 175 went to other world markets. It has been estimated that perhaps as few as 200 have survived.

Be the only one at your Cruise night with this Classic.

Come back soon for more classic vehicles – better yet, join our email list for updates!