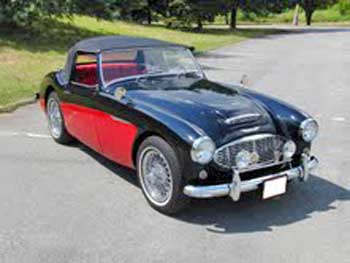 FOR SALE: 1960 AUSTIN HEALEY BT7. The Austin-Healey brand was created through the establishment of a joint company based on the agreement between the owner of the British Motor Corporation (BMC), Mr. Leonard Lord (Austin Division) and the owner of the Donald Healey Company, a well-known car engineer and designer, in 1952. The vehicles of the Austin-Healey brand had been produced until 1972, when the 20-year-long agreement and cooperation between Healey and Austin ended. Donald Healey left the joint company in 1968 after the British Motor Holdings (BMC) and British Leyland (BMH), the Jaguar brand car manufacturer, merged together in 1966. Austin-Healey 3000 MKI – BN7 (2-seat version) and BT7 (2+2 seat version). The production of this type of automobile started in 1959 and ended in 1961.

The vehicle restoration started in October, 2008 by dismantling individual parts. As needed following the disassembly, individual works were carried out in order to restore the vehicle perfectly and identically. All parts and elements are genuine originals that underwent complete restoration. Interventions into these parts were carried out mechanically, as well as chemically – in an effort to preserve these parts for a long time. Some of the replaced parts were produced based on the originals in a restoration workshop and some were replaced with purchased originals, not replicas. The engine part (the engine), the gear part (the gearbox) and the whole chassis part (the vehicle chassis) underwent complete restoration. It needs to be especially emphasized that the restoration of these parts means their complete dismantling, cleaning and in case of a flawed part – replacement. Flawless operation and functionality of the vehicle has been ensured this way even in conditions of excessive road traffic load. The restoration of the vehicle was finalized in May 2011 and thus the vehicle is now in TOP shape.

The vehicle passed the Testing of Historic Vehicles achieving the highest rating of A1 according to the FIVA evaluation. It currently holds a license plate number and is placed into operation on road communications. The car has participated in several veteran events always receiving the highest awards and ratings in its category.