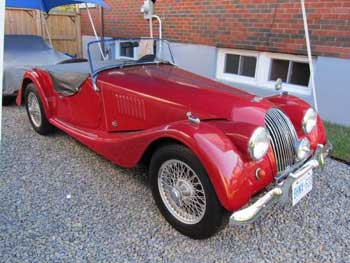 SOLD: 1968 MORGAN 4/4 ROADSTER. Originally an Ontario car, it has spent the past 15 years in BC. Recently returned here, it’s an original car that runs and drives well. Engine is strong, no smoke, new rear springs, tuned up, everything works. This car is unrestored, but presents nicely. It has the original 1.5L Ford Cortina engine with original Weber carburetor, four-speed all-synchro transmission with the original push-pull gearshift, decent top and sidescreens, fly-off handbrake, full tonneau, good exhaust and brakes. Engine bay is not detailed, interior is original. Bumpers are shiny but rear has been repaired and the overriders are not even. This is not a show car, but it does show well. Body and frame are good; wood is fine; the car is structurally solid; paint is old, but is original colour and is shiny and presentable. It’s an eye-catching car at British car shows and gets appreciative comments. This is a fairly rare car, especially with its original drivetrain. It’s car B1461, and is close to the end of the run for this particular model, with only 1298 built between 1955 and 1968. It’s a two-seater and will be sold with an Ontario safety certificate. Morgans are hard to come by, as most owners simply don’t sell. Here’s your chance!