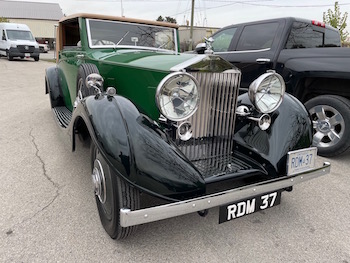 In 1981, this vehicle consisted of the chassis (No. GHO20) and power train for a hearse. The engine and the rest of the power train are original, the headlights are from a 1940 model. When the owner started the project, he contacted the most knowledgeable people in the pre World War II Rolls-Royce community. This correspondence and many other documents related to the restoration along with photographs are contained in a Dropbox folder which we can link you to, or from which we can send by WeTransfer. As an example, there is a large drafting document which lays out the profile of the car and some alternative designs that were considered. This included whether to have an integrated trunk or a removable one. There are also similar vehicles that were offered by Thrupp & Maberly. There is a series of images of the car where different colour bodies are explored. The owner chose the coachbuilder, R.J. Dudley of Barwick, to build the body. The body shell that they produced was done using the techniques employed at the time in 1937. When completed, the body shell was mounted on a platform and shipped in the belly of a Boeing 747 to Toronto. There are many pictures which show the body shell being delivered and being mounted on the chassis.

The power train including the engine were all rebuilt by the owner, the body shell was assembled and mounted on the chassis frame by Hyphen Repairs, a Rolls-Royce restoration specialist. The car was painted by Kendrick Coachworks, a Rolls-Royce appointed coachwork repair facility at the time. The trimming of the interior was done by John Kokal, a well known European Marque specialist.

The vehicle was first shown at the Rolls-Royce Nationals in 1988, and won the Guerrero Award for best restoration, and the Brace Award. In 1989, it won the Best of America Award (best of prior winners of certain specified awards).

All offers are gratefully received. We always make every effort to negotiate a satisfactory deal for both parties.

Check out the MOVIE: